All About Clogs—Dutch Wooden Shoes

Wooden clogs, known in The Netherlands as “klompen”, are as quintessentially Dutch as the windmill and tulip. Though found throughout Europe, the shoe made entirely from wood has a Dutch history traced back before the middle ages. It is unknown exactly when they were adopted for practical use because the remains are scarce. When the klompen wore out, they made perfect firewood! The earliest such shoe on record was discovered in Amsterdam and dates back to the year 1230.

Meant to protect the entire foot, Dutch clogs are traditionally made from alder, poplar, or willow wood. Although they may look uncomfortable, wearers swear otherwise. Klompen allows feet to breathe easier than fabric or leather shoes. They stay cool in the hot months and warm in the cold months. They even provide additional support for good posture – all benefits medical doctors verify. Modern klompen have even passed EU safety tests and are considered safe to use while on the job.

Before the Middle Ages, it was common for people to live their lives barefoot. Especially for the rural poor, shoes were out of reach. At the time, shoes, wooden or otherwise, were a status symbol—the pre-Middle Age elite paved the way for the klompen. A klompen precursor, called the Trippen or Platijnen, featured wooden soles with leather on top. The protective wooden base gave way to the fully wooden shoe, which gained popularity during the 16th Century. At that time, klompen offered a cheap and practical alternative to the leather and fabric shoes of the upper class. 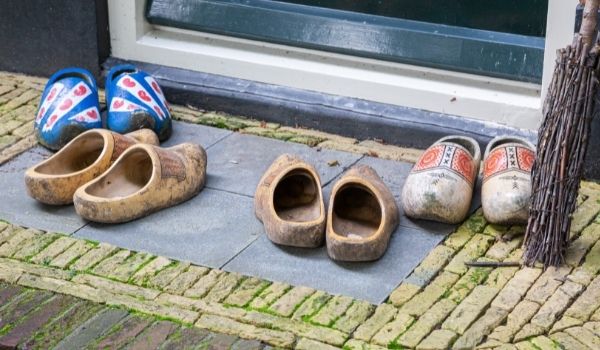 Traditionally worn by farmers, fishermen, and various other working-class members, the shoe was a practical necessity. In wet conditions, like on boats or bogs, they would keep feet dry. They could also protect against sharp fishhooks or nails. The Dutch wooden shoes were shaped differently for each profession. Klompen for fisherman had pointed toes to sort out their nets. They also featured a square heel to dig out peat blocks and maintain stability on muddy soil. Some versions had cleats on the bottom, which allowed for walking on icy canals. Even horses sported klompen at the time! 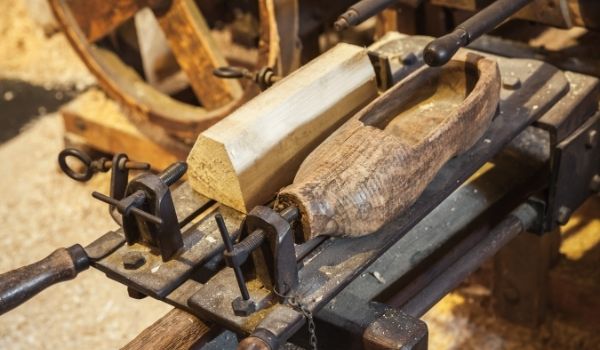 Designated craftsman in each village handmade pairs over a three to four-hour timespan. The clog maker hacked, sawed, and carved each pair uniquely for the individual and occasion from farm to foot. First, they would slice the tree trunk. Then, split the sliced trunk with an axe before smoothing out the clog’s initial shape with a knife. Finally, they would scoop out the remaining wood from the inside. Craftsmen always worked with dampened wood to avoid splinters. The last step, drying, took around three weeks to complete as the wind would dry each pair. 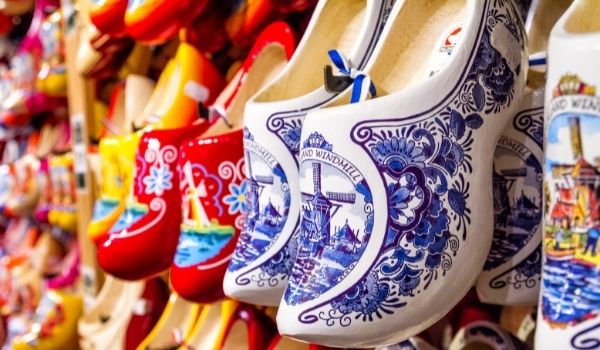 Today’s klompen are virtually identical to the design from centuries ago. However, their practical use diminished over time. By the 20th Century, industrial shoe manufacturers flourished in The Netherlands, inciting less demand for the artisanal klompen. There was a brief revival at the outset of both World Wars as leather became scarce. This time brought forth more individualized versions of klompen. Villages developed unique styles, colors, carvings, and decorative patterns as a result. Nowadays, some 300,000 are made a year. The booming tourist market consumes the vast majority – a trend beginning at the end of the 19th Century.

Klompen can be seen today in the Dutch countryside used by blacksmiths, farmers, fishermen, and gardeners. Some 12 – 30 traditional klompen craftsmen still exist around The Netherlands. They respect the artistry and history of the shoe while adopting contemporary crafting techniques. These traditional clog makers are responsible for the continued interest in the shoe. 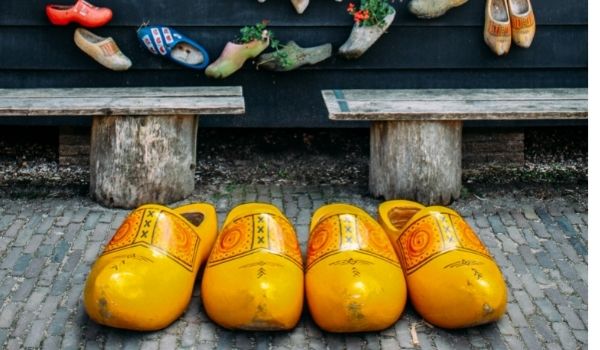 One such place is the Kooijman Wooden Shoe Workshop in Zaandam’s historical neighborhood Zaanse Schans. Just a short ride by train from Amsterdam, the Kooijman Workshop has demonstrated the traditional clog-making process since 1974. The shop’s proprietors Jaap and Ineke Kooijman use restored antique machines as authentic as possible. The Kooijman Wooden Shoe Workshop also runs the Klompen Museum. Visitors can see clogs throughout different eras and regions – the Italian Zoccollo, German Holzschuh, Portuguese Tamanco, and Belgian Sabots. Around one million visitors per year watch demonstrations here and learn about the humble beginnings of the klompen.

There are several other museums dedicated to wooden clogs across the Netherlands. These include International Klompenmusuem in Eelde, Klompen Museum Best, and Klompenmuseum Goor. Finally, there is Scherjon’s Klompenmakerij and Klompenmuseum – an all-around klompen activity center featuring sixth-generation craftsmen.

To see the klompen in action, you can check out traditional Dutch Klompendansen, which occur at fairs across the country. As the name suggests, it is a dance of pagan origin where participants wear traditional Dutch costumes and klompen. A room full of klompen stomping against the floor makes a sound you can only hear in the Netherlands!