Pension System and Retirement Age in The Netherlands

If you have chosen to settle down in the Netherlands, at a certain point you will want to consider retirement. Although pensions may not be the most glamorous of topics, whether it seems like a lifetime away or just around the corner, it’s reassuring to know what you will be entitled to once you do retire.

Pension plans are often confusing, and getting to grips with the pension system here may seem like a daunting task for a non-native. But, the sooner you understand the Dutch pension system, the better equipped you will be at retirement age. In the Netherlands your pension is the income you will receive:

In this article we will break down the Dutch pension system, detailing where your pension income comes from, what you will be entitled to, and what happens if you move abroad so that you can more responsibly prepare for your retirement. 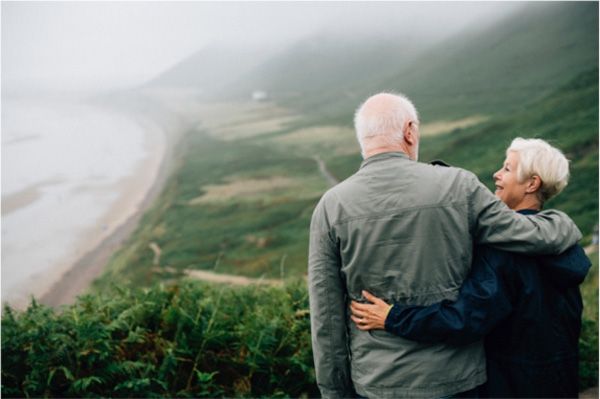 Benefits of Retiring in the Netherlands

You will be happy to know that the Netherlands is one of the best places in the world to retire in. Dutch pension schemes are quite robust for a number of reasons including strict regulation to protect workers, a broad spectrum of pension funding sources, and a large amount of capital available for investment. The amount of money currently being managed by pension providers for employees and retirees in the Netherlands is around €1,000 billion.

It’s never too late to start saving for your future.

If you have spent a large portion of your working life here, then you will be perfectly poised to take full advantage of the best pension system in the world. However, regardless of how long you have spent here, it is important to know how the pension system works so that you can best prepare.

In the Netherlands, pensions can be comprised of three distinct income sources or “pillars”. Together, these three pillars determine how much will be in your pension fund when you reach the age of retirement.  Please note if you do not retire in The Netherlands, you are still entitled to receive your pension.

The three pillars are:

This first pillar forms the foundation of the Dutch pension system. The AOW pension (or basispensioen) is the state pension from the Netherlands. Regardless of nationality, everyone who has lived or worked in the Netherlands will automatically receive this pension upon hitting the age of retirement, which is currently 66 years 4 months years old. From 2020, the retirement age could be linked to life expectancy, which means that the age when someone is eligible may (in theory) change from year to year.

The first pillar refers to the pension received from the Dutch government and is defined as:

Evolution of the AOW age and where it’s headed

The AOW pension age is based on life expectancy. So, for example, anyone born after 31 December 1958 must be at least 66 years 4 months to qualify. It is estimated that, by 2024, the retirement age will be raised to 67 years. You can calculate your estimated pension age via SVB (Sociale Verzekeringsbank) website.

How much is the AOW pension?

The AOW pension amounts to a percentage of the statutory minimum wage at the time. The amount you will receive generally depends on two factors.

As of the beginning of this year, if a full pension is built up, the Dutch state pension rates are as follows:

As with other forms of income in the Netherlands, holiday allowance is paid out in May.

Approximately four months before you are due to retire, the Sociale Verzekeringsbank (SVB) will send you a letter with information on claiming your state pension. To claim, you will need your DigID and IBAN number. If you also worked in other countries, you will need scans of documents detailing these periods.

The state pension should be supplemented by the second and third pillars to further boost your retirement income. The second pillar consists of an occupational pension, either company or industry-wide, for employees. There is no legal obligation to offer a company pension scheme. However, around 95 percent of employees in the Netherlands have some type of supplementary pension with their job.

These types of pensions are usually managed by a non-profit pension fund that is legally and financially separate from the company itself. This keeps the pension fund protected should the company get into financial difficulties before your retirement.

The secondary pillar is generally what you, as an employee, accumulate via your employer during the duration of your employment. This contribution is usually paid by both the employer and the employee. The collective pension schemes via the employer are in addition to the AOW (First pillar) and the Anw (death). Please note the second pillar pension may not start at the same time as the first pillar pension payouts, so it’s important to plan properly for your retirement. Pension contributions and the value of accrued pension via an employer are not taxed, however,  the pension payments are not tax-exempt.

Under the second pillar, there are generally five types of pension providers: 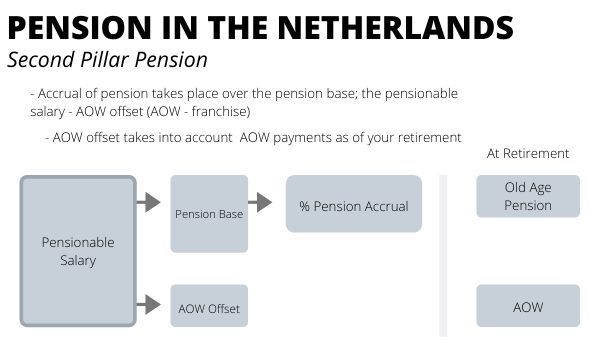 How a Dutch labour pension is calculated

Company pensions are calculated as a percentage of your gross salary (usually between 4 – 7 percent). First, the AOW state pension offset is deducted from your overall pensionable salary. From that, the pension accrual amount is determined.

The exact contributions depend on the individual pension scheme, but the employer and employee both pay an amount towards this. Your payslip will detail the exact pension contributions paid by your company.

It’s not always possible to avail of a company or industry-wide pension plan. For those in industries without such schemes, or self-employed, the third pillar is made up of private pension policies. However, anybody in the Netherlands can purchase such a scheme to additionally supplement their retirement fund. 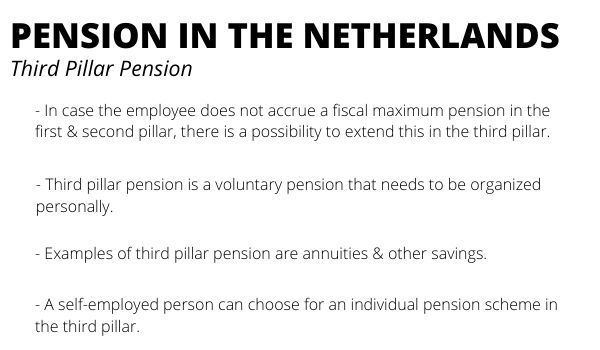 As the loss of a family member comes with financial difficulties, the Dutch government has also created the Anw survivor benefit scheme. In the event of your death, your combined pension accrual is not necessarily lost as your surviving children will receive a percentage of your pension, if under 21 years of age. If your partner has not yet reached AOW age themselves, they may also be entitled to a survivor’s benefit.

Leaving the Netherlands Before Retirement

Although you will stop accruing AOW pension rights upon leaving the Netherlands, the years spent here still contribute towards your pension payout. If you take out a voluntary AOW insurance at least 12 months before leaving, you will receive the unreduced AOW pension rate upon your retirement. It is up to you to keep track of your second and third pillar pension plans as you move around.

Once you move from the Netherlands, your partner will no longer qualify to receive the Anw survivor benefit in the event of your death. But, as with the AOW pension, a voluntary Anw insurance can be taken out to compensate. 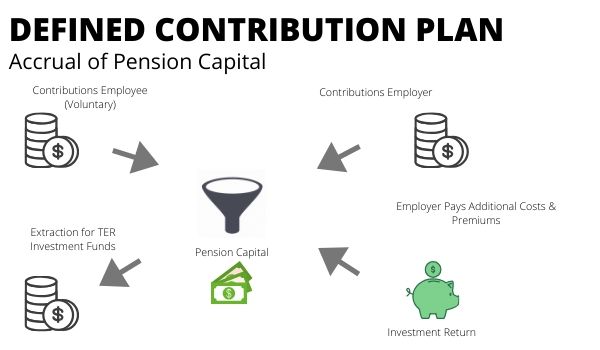 If you retire in the Netherlands you will receive a state pension (first pillar), dependant on the number of years you have been here, along with any supplementary pension you may have in place (second and third pillars). It goes without saying that the more pension pillars you have in place now, the more stable your retirement will be in the future.

But, unlike many other countries around the world, the Netherlands is well prepared to handle its aging population. With a generally low cost of living for retirees, top-quality healthcare, and a comprehensive pension system, the Netherlands is quite an attractive place to retire in.