The Best Strategy to Learn Dutch? Be Open-Minded

Albert understands why people don’t want to learn Dutch – he hated studying language, too! So he developed a new strategy to make the process easier and more enjoyable.

You might not expect it from a Dutchman, but Albert Both is full of laughs. He helps you relax, which is a key part of his strategy. “A big part of my job is to take away the resistance,” he says. “Too often, when people learn a new language, they’re too close-minded.” That’s the foundation of his strategy for learning Dutch: be open-minded. He wants you to open yourself to new rules and ways of thinking. 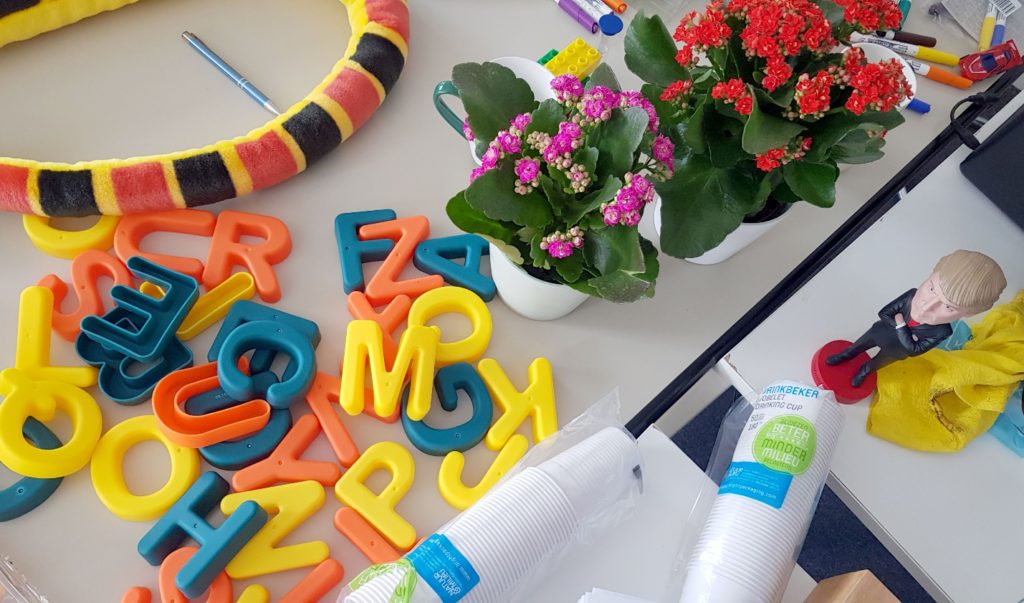 An Informal Environment for Learning Dutch

Albert’s classroom may catch you off-guard. The table is full of stuff, like something you’d expect from an elementary school classroom. There are stuffed animals, packages of snacks, large plastic letters, sugar packets, and colored pens. Initially it seems confusing, but then you may realize you learned your native language in a similar environment.

He has a plush snake that he uses when describing long sentences, and a fuzzy ant to explain what it means to be a mierenneuker, i.e. someone who…makes passionate love to an ant. It’s an idiom that can be compared to “splitting hairs” or “nit-picking,” and usually used to describe people who are obsessed with grammar rules.

“It puts people in a good mood,” Albert says, “because then it’s less serious and people can make all the mistakes that they want.” 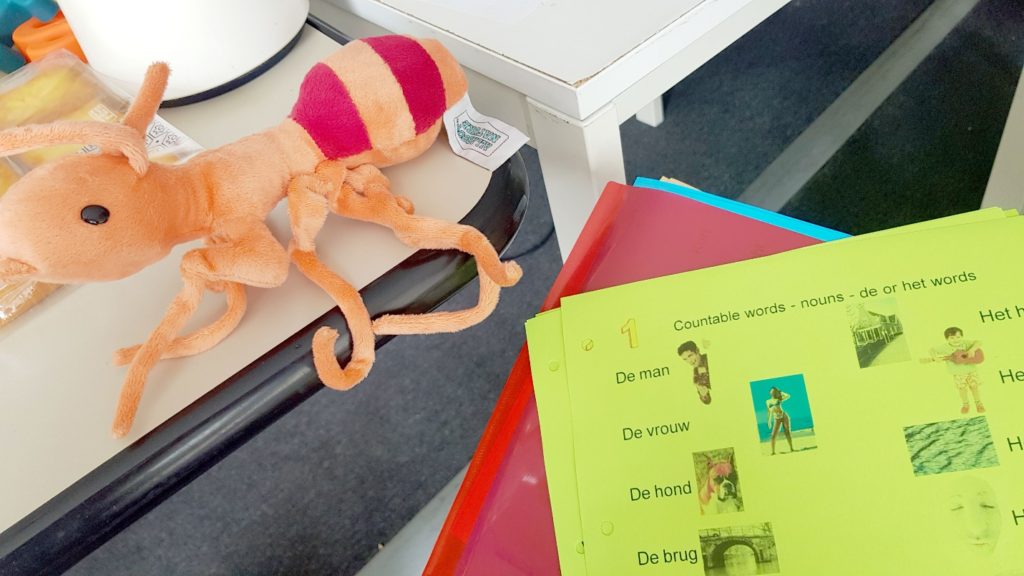 “I think language is pure magic.”

Albert started teaching Dutch with a bike and a laptop going from home to home. But in the early 2000s, teaching Dutch was just his part-time job. After a coaching session, someone asked him “Why don’t you start your own language course?”

The idea never occurred to him because he hated his own Dutch classes in school. Albert didn’t feel he understood Dutch grammar well enough to teach it, and never enjoyed literature or poetry.

But he believes learning languages can open new worlds and change the way people think. He learned Spanish, French, Greek, and Turkish, and he knows that languages can be similar in many ways. Albert puts himself into other people’s shoes to understand what’s easy or difficult for his students when learning Dutch.

He has spent over 15 years developing his strategy called “Dutch Flow,” which is his seven-day intensive Dutch language program. He spends the first day getting to know you so that he can determine the most natural path to teaching you Dutch. 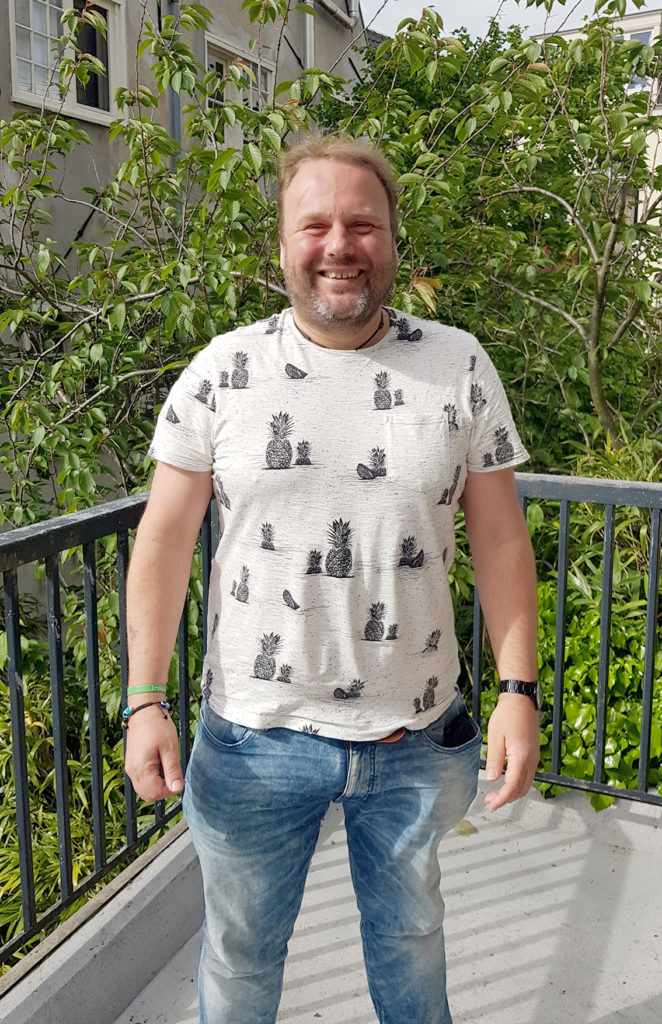 Albert believes “Intensity is something you really need.” Most people just want to learn enough Dutch to pass the A1 exam, or memorize enough to get through their daily routines. But understanding Dutch can be so much more than that, and Albert’s goal is to change the way you think. “Chances are, you can construct a sentence, but you can’t improvise,” he says.

Many of us remember struggling with language classes in school, and now, the idea of studying Dutch is not so appealing. But what if you weren’t graded? Or didn’t have homework to complete? Or vocabulary lists to memorize? What if learning Dutch was as easy as having a conversation in your native tongue?

That’s the first step of Albert’s strategy – talking about Dutch and your language.

He says he’ll ask a student “How do you say ‘I feel good’ in your language?” He will identify the commonalities between their language and Dutch, whether it’s vocabulary or sentence structure or sounds. Albert doesn’t believe you can be told how to understand Dutch – you have to participate willingly in the learning process and relate it to what you already know.

This is just an example of how Albert chips away at resistance and lays the groundwork for success. Learning Dutch (or any language) is also the process of unlearning your own language. Grammar structure or pronunciation may already seem logical, but when you go through the process of unlearning, your mind is flexible and open to new ways of thinking and speaking. 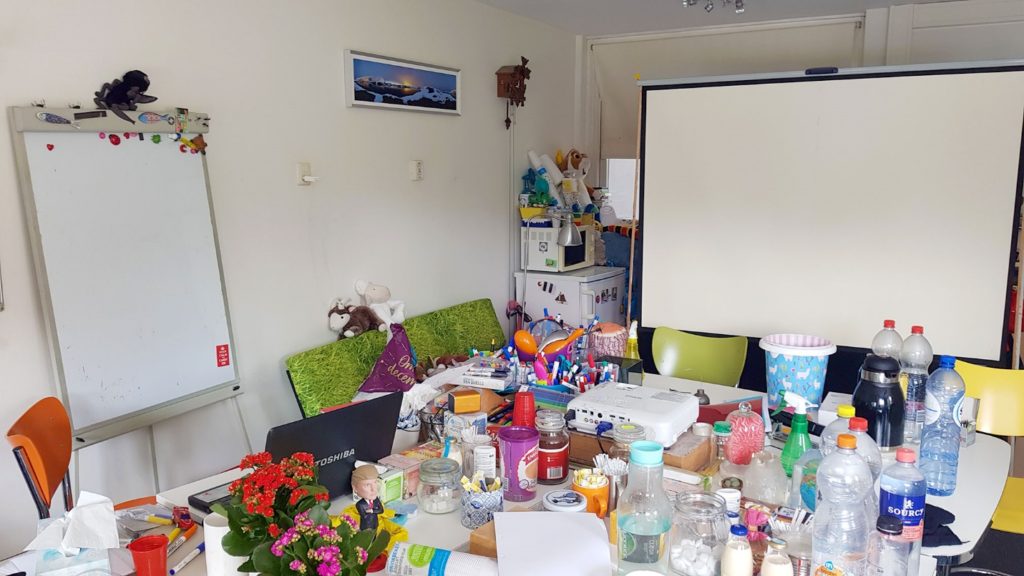 Finding Logic and Common Ground in the Dutch Language

Albert dislikes Dutch grammar as much as you do. He also understands that it can be an obstacle for people: if you struggle to grasp the grammar, it may feel like all of it will be impossible to learn. But Albert realized that he doesn’t have to teach Dutch to adults the same way we studied language in school. He believes “You have to start where people are, and then by showing them logical next steps, it’s very easy for people to move forward.”

For example, Albert projects an image of a horse plus a garden on the big screen. The Dutch word for zoo is dierentuin, which combines the Dutch words for “animals” and “garden.” Similarly, the next slide displays the Dutch word for glove, handschoen, with a picture of a hand, a shoe, and then a glove.

It’s much easier for Albert’s students to build vocabulary this way, rather than memorize a list of words. “If you don’t experience it with the things that you see, it’s hard to believe it.” Albert sees a clear structure behind the Dutch language, but the learning process for his students still has to be logical.

He also knows there are some things about language that just can’t be explained. When students ask him “Why is it ‘de’ and not ‘het’?” he may then ask his students “Why are you a woman and not a man?” He doesn’t want to make his students feel stupid or wrong for asking a question – he keeps it light-hearted by offering as much of an explanation as he can.

Albert wants to show people they can learn Dutch in a pleasant, fun, and exciting way. You can’t be so hard on yourself for trying something new.