Swimming in the Amsterdam Canals

The Netherlands is a very watery nation. It boasts an enormous coastline, an intricate infrastructure of canals, several natural and manmade lakes, parks filled with ponds and, in desperate times, the fountains and city square water features. All of these amenities provide opportunities to cool down and get wet in the high temperatures of summer. The Netherlands is also very regulated, with many fines (boetes) to discourage you from breaking the law. While swimming at the beach might be the safest option, it’s not the most convenient for Amsterdammers, as you have to take an (often packed) train to the coastline. Still, the Dutch Capital is chock-a-block with the world-famous canal system, and this can be the easiest body of water to reach. So, if swimming in the Amsterdam canals is the nearest option, are they the safest and indeed considered a public service or a fineable offence?

What are the Risks of Swimming in the Amsterdam Canals?

Strictly speaking, canal swimming is discouraged and can come with a fine of up to E140. That said, many Amsterdammers take the risk each summer and enjoy a dip in the city’s many alluring and refreshing canals. In a nation that adopts a practical approach to life, usually, if it’s a need of the people, it’s possible. Think about those handy pee places (plaskrul) all over Amsterdam, the green metal ones that blend in along the canal banks, and the white metal space-age ones that appear on Dam Square and other tourist hotspots in the evenings. The metal pee places are like the Dutch R2D2s. They automagically emerge from the streets as robot piss-pots and return to sleep each morning. Of course, there are also the world-famous coffee shops and the infamous Redlight area (De Wallen), again meeting the needs of the people! So why would such practical people ban and fine their citizens for regularly swimming in the canals?

Could Water Quality Be The Issue?

Could the water quality be why the council want you to avoid swimming in the canals? Well, the water is now the cleanest it has ever been. But hold on, put the swimming costume down and keep reading! Just because it’s the cleanest it has ever been does not mean it’s safe. In the past, the Amsterdam canals were a community trash can and a convenient sewer/toilet – this was especially so during times of mass expansion, and so the canals were often filthy. Today we benefit from regular refuse collections across the city and a better sewerage system, so the two primary pollutants of the canals are under control. That said, the canals do sometimes fill with city sewerage, especially after heavy rainfall. This filthy water leakage can mean you find E. Coli and other nasty bacteria swirling around in the canals, which could make you pretty sick. In addition, there are lots of other bacteria flourishing through the canals post a spell of heavy rain – you could be swimming with Norovirus type 1, rotavirus, and enterococcus. So, for the good of your health, there’s a fine to discourage you from entering the canals even in the hottest weather.

Is it Safe? What Lurks Beneath?

Anyone who has lived here for at least a year will likely have witnessed the city council’s canals being ‘cleaned’. This involves a digger/mini-crane that yanks out countless old bicycles, shopping trolleys, planks of wood, old furniture, sharp scraps of metal and a whole host of debris that either slipped or was flung into the canal. Any of these items could cut your foot or catch onto your body if you dive in or swim deep. Thus it is not fair to say canal swimming is safe; quite the opposite.

There’s a theme here of explaining why something shouldn’t be done but also saying it happens all the time. So, people do swim in the canals, and many enjoy jumping off a bridge for the thrill of it. This is mega dangerous, and yet it happens. So though unsafe, the choice is yours. It must also be said; that boats pose considerable danger. Your tiny little body is almost unidentifiable to the boats. Usually, the only visible part of you is your pretty little head, and this is but a dot of insignificant water glitter to the large tourist boats or cargo-carrying barges who won’t see you but might meet you ‘pon the canal water – don’t risk it! 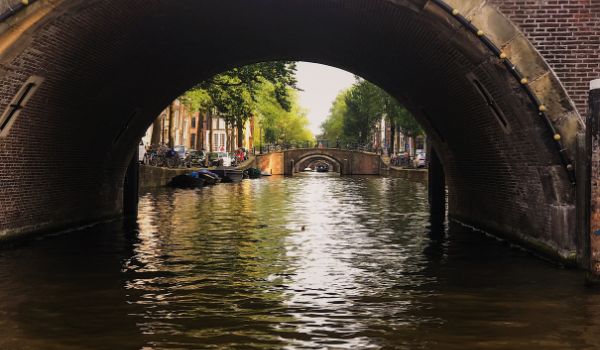 Yes – there are so many alternatives to swimming in the Amsterdam canals. Welcome to wetland where you can swim in the beautiful Twiske of the Noord. It is a massive manufactured lake with several swimming locations, one of which is clothing optional.

If Noord is not easy for you to get to, Nieuwe Meer is another lake in the southwest of the city with lots of excellent cafes, pancakes houses and waterways to swim in.

You can also enter the manmade lake known as Gaasperplas found in the Southeast of the city.

Here’s a handy link to see all the swimming spots in the city.

Wet in the City Centre

There are cooling-off water features in the many city squares, like on Haarlemmerplein. Each summer, the council turns the taps on to shoot streams of refreshingly cool water onto the street. This gives children and the occasional brave puppy a chance to play catch, splash around and cool down.

Then, of course, there are the many amazing swimming pools in the city, including Zuiderbad on Museumplein, a century-old facility in a beautiful red brick building. Zuiderbad is a small but friendly swimming pool next to the Rijksmuseum.

Het Marnix is a huge swimming pool that provides lane swimming; they have a smaller, less serious pool for a gentle dip.

Brediusbad is an outdoor pool in the west that only opens in the warmer months; they have a nice blue water pool, a snack bar, sun lounging areas, and it’s super cheap to enter. 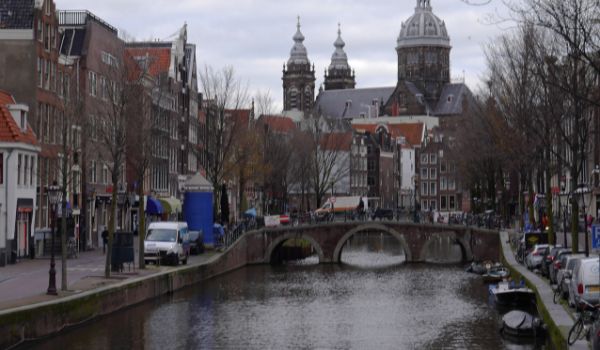 Final Thoughts on Swimming in the Amsterdam Canals

Swimming in canals happens, it’s fun, and for those who like ‘good content’ moments, the pics will look nice on your Instagram, and it will be a fun time with your friends/family, but it’s risky and could come with a fine. Ultimately, it’s up to you to choose what suits your needs on the day. If you do go for a canal dip, you won’t be alone!