The first legally inhabitable property in the continent created with 3D technology has welcomed its first tenants. Built in the shape of a boulder, and inspired by The Flinstones, retired shopkeepers Elize Lutz and Harrie Dekkers officially received the keys (well, kind of as the front door is opened via app).

Built by the firm Saint-Gobain Weber Beamix in the Eindhoven suburb of Bosrijk, the house is one of 5 planned. It features 94sq meters of living space as a two-bedroom bungalow. Though properties partly constructed using 3D printing technology have popped up around France and the United States, the Bosrijk is different. Its load-bearing walls have been fully printed using a 3D printer nozzle. 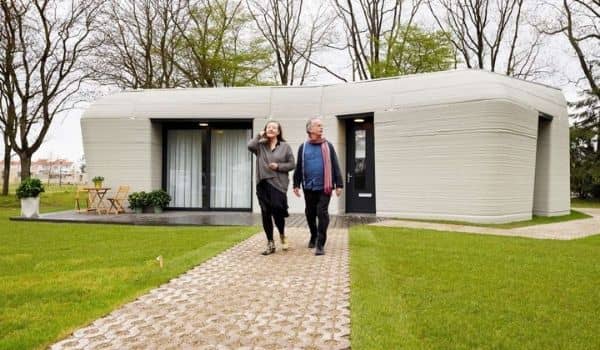 3D printing is a method that involves a large robotic arm with a nozzle that shoots out a specially formulated cement. That cement is then molded according to the architect’s wishes, adding layer after layer to increase strength.

3D printing is seen by many in the construction industry as, not only cost-cutting but also a deterrent to environmental damage. As it uses less cement. Of particular note, where there is currently a shortage of construction laborers, the method also cuts back on manpower needed. It is hoped that by the fifth house construction, all work will be done on-site. This would further limiting costs and environmental damage. The 3D printed approach to new housing construction can also help solve the current housing crisis in the Netherlands and many other European cities.

What’s Next for the 3D Printed House?

Lutz and Dekkers will live in the house for six months, beginning on August 1. They were chosen from a pool of applicants and will now pay €800 per month. Yes, that would be about half of the market rate for such a property virtually anywhere else in the country. They will not be able to rent their new property in the Netherlands out either, despite how much they may want to.

“With the 3D printed house, we’re now setting the tone for the future: the rapid realization of affordable homes with control over the shape of your own house,” says Eindhoven alderman for housing and spatial development.