In the not too distant future, the next tech disruption may very well come from something called “NH3,” more popularly known as ammonia.

In early June, Rotterdam will host a conference on NH3, exploring the business surrounding using ammonia as a clean alternative to fossil fuels. Dubbed the Third European Conference on Sustainable Ammonia Solutions, the convention will be taking place at the Rotterdam Zoo.

Academics, experts, and scientists, speakers will discuss how NH3 could have world-changing effects on energy and power. Ammonia, made up of nitrogen and hydrogen, and already widely in use as fertilizer, has zero carbon emissions, is a fraction the cost of petrol, not to mention inexpensive to retrofit combustion engines.

Locally, changes in this regard have already begun. About a year ago, The Netherlands launched a pilot program to have an ammonia tanker run on the fuel of its own cargo.

Hans Vrijenhoef, director of Proton Ventures – the company producing the conference – said that while ammonia is used mainly in the fertilizer business, he hopes that will change in the global effort to switch to renewable fuels.

“We can use ammonia to drive with vehicles, or for the propulsion of vessels or ships, to heat our houses, or to generate power in a power plant, to transfer offshore wind and solar energy in a liquid form,” Vrijenhoef said. 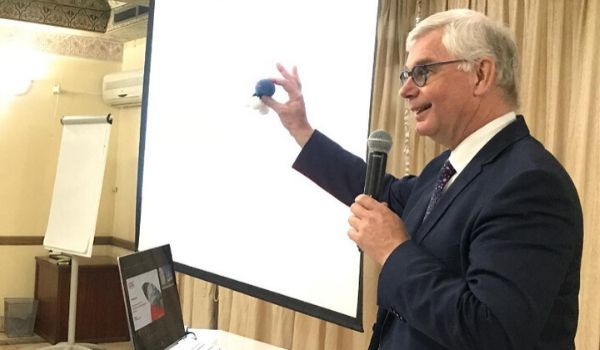 This is, indeed, an effort seen worldwide. In Canada, for example, pharmaceutical entrepreneur Roger Gordon’s truck runs on NH3, which required a €600 retrofit, the size of a laptop. There are some 100 vehicles just like his, he added. He also patented a method to run his own NH3-producing machine on renewable fuel sources, which makes 500 liters of NH3 per day. The cost of such a machine is about €6000, and creates about five liters for €1.

Fuel efficiency, he said, is about nine-tenths of regular fuel at the pump.

Jay Schmuecker of Solar Hydrogen System, who hails from Iowa, in the United States, will be speaking at the conference. Built on his farm are a solar-powered ammonia generation and storage system, and his was the world’s first tractor to run on NH3, in 2015.

Schmuecker worked at Caltech’s NASA Jet Propulsion Laboratory for more than five decades, and he helped assemble Mariner II, the first craft to fly by another planet, Venus, in 1962.

“Fossil fuels will not be available forever. It is important that we make the public aware that ammonia is a vibrant carbon emission-free fuel,” he noted, adding that ammonia’s use for fertilizer is more planet-friendly than cattle-derived manure, requiring an enormous carbon footprint.

Josua Vlieten, from the German Aerospace Center’s Institute of Solar Research, said that “finding renewable ways for ammonia production such as solar-powered options is an important step to fight global warming.”

The Netherlands, he added, has “great potential” in terms of wind power, where “excess power could be stored in the form of ammonia, and used for power generation during times with lower wind.” And given the Netherlands’ access to ports, its sea vessels could benefit from clean, cheap fuel.

“It’s not just some dream of idealists,” Vlieten said. “I hope everybody can take home new ideas and concepts to get one step closer to using ammonia as an energy carrier.”