The Best Christmas Markets Across Europe

Look, there’s no such thing as a tepid Christmas fair. At the very least, you can expect stalls and stalls’ worth of freshly-fried food – salty and sweet – a wealth of wooden toys, scented candles, leather goods, and other items showcasing the talent of local craftsmen. Have you ever seen a sad person trying to juggle a paper plate of roast chestnuts in one hand and an enormous plush toy in the other? No, you haven’t. There’s a reason for that.

However, one thing needs to be established: some Christmas fairs are just better than others. Take Strasbourg or Colmar: even if they didn’t have Ferris wheels or an ice skating rink, people still obsess over these locations. Why? The beautiful, medieval-era architecture, the dainty house facades, and the dimly-lit river bank win over visitors every time.

Brussels, on the other hand, has something else to offer. Now, you might not like light and sound installations, but that’s because you haven’t been to the one at the Grand Palace. The expertly-composed show is bound to astonish children and adults alike, while its other activities, including a vintage clothing pop-up and Zumba classes – who said Christmas markets can’t be versatile – will keep the rest of the family entertained.

When it comes to the activities on offer, Maastricht is the place to be: with its human-size bauble installations, 264 feet high Ferris wheel and a vast range of other activities, the MagischMarkt will get you hooked in no time.

Ready to find out which Christmas Market is the best Christmas market of them all? Read on. 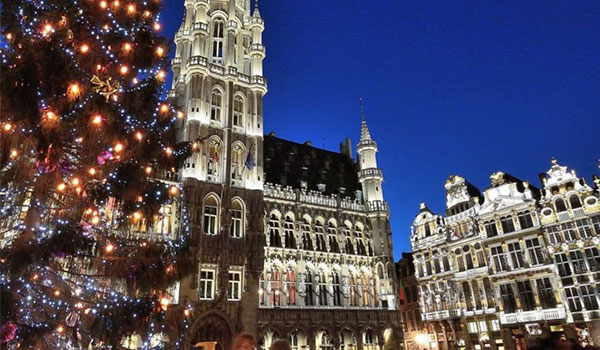 With its vintage markets, Zumba flash mobs, and day-long celebrations, the Brussels Christmas Market offers so much more than your average fair.

Gift-shopping you might want to try, but you won’t feel the need to: the 55-meter-tall, absolutely dazzling Ferris wheel, dozens of carousels, ice skating rink, and the state-of-the-art sound and light show at the Grande Palace will keep you just as occupied.

Scattered across six locations – the Bourse, the Place de la Monnaie, the Place Sainte-Catherine, the Place de Brouckère and the Marché aux Poissons, alongside the Grand Palace – this interactive, forward-thinking Christmas market caters to every need – including the ones you didn’t know you had.

Each year, a spectacular Christmas tree is erected in front of the Grand Palace. This year, the baubles come in the colors of the Belgian flag, a 1.5 km long garland and figures taking after Brussel’s most famous landmark, the Manneken-Pis. Eager to get a taster of the magnificent tree before your arrival? Check out the live footage capturing the activities taking place at the Grand Place.

The most progressive, futuristic Christmas fair of them all? It has to be the Winter Wonders and Christmas Market. 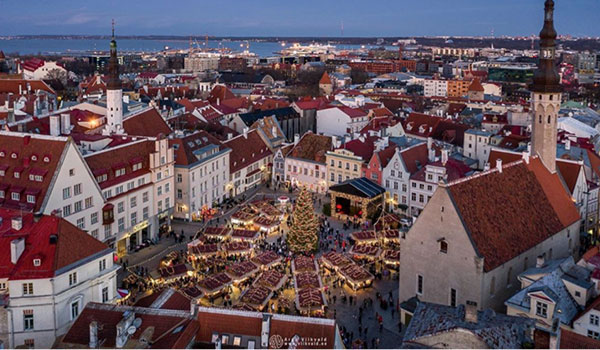 Most Christmas markets are magically tidy, beautifully decorated and incredibly atmospheric. Stalls are filled to the brim with endearingly adorable folkloric wares, or else, adorned with wreaths, fairy lights or tiny red tea candles. Music is playing, the cacophony of jingles make you dizzy, but in a good way. That’s what the standard scenario looks like.

Not in Tallinn. The organizers of the largest Estonian Christmas market take things a step further, designing a fair with an aesthetic taken straight from a children’s book about Santa Claus. How did they achieve this spectacular effect? Where do I begin?

Let’s take a quick look at the outline of the market. The devil is in the details, and in a bid to create the most idyllic, harmonious Christmas fair, the Tallinn-based planners opted for a fan-shaped arrangement, creating a more spacious floor plan. Tired of brushing elbows all the time? Scared of losing the kids in the mob? Go to Tallinn. Their take on a Christmas fair is to the average fair what Zaha Hadid’s streamline building complexes are to a garden shed. They are in a different category altogether.

As to the offerings? Sip on some bittersweet, malty, softly fizzing Kvass, or treat yourself to a slice of rye bread. In the mood for something more gluttonous? Try the tiny, chocolate cream-filled donuts, or the traditional sausages served with pan-fried potatoes and a hefty portion of sauerkraut? A real gamechanger. 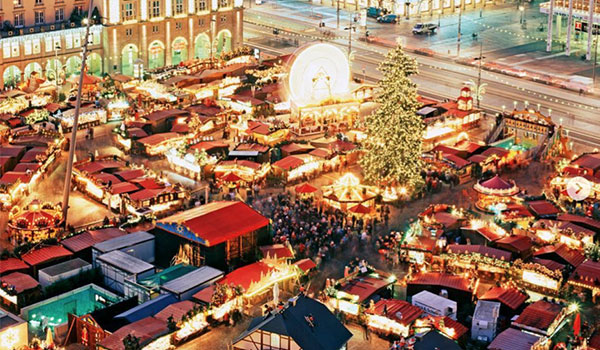 What do you get when you mix together sugar, industrial quantities of orange peel, raisins, bright green cardamom pods, a mighty portion of fresh ginger, a handful of cinnamon sticks, four shots of vodka, and a bottle of wine, plonk it on the stove and wait until it heats up gently?

It’s not alcohol stew, don’t worry. Unlike its modest, relatively uninteresting British counterpart, the mulled wine, or its ever-popular, bold and colorful German cousin, the Glühwein, Glog is characterized by refined tastes, robust flavors, and a whole lot of fun. What does this all mean? Glog contains the highest ratio of alcohol of them all.

Where can you get this? The Copenhagen Christmas Market is your best bet. Although it might not be the birthplace of the brilliant hot beverage – this is subject to some fierce debate – it is the place where you can try the largest number of different brews.

Does it take a gourmet to enjoy a mugful of Glog? Absolutely not, but the most devoted fans of the hot drink will have a hard time resisting all the different recipes. 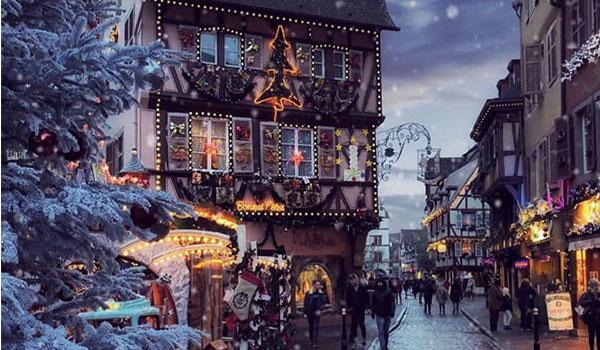 Home to world-renowned institutions like the Unterlinden Museum and the Museum Bartholdi, as well as heritage sights like Little Venice, Colmar is worth a visit for a lot more than just the annual Christmas fair.

With stalls scattered across the old town, the Christmas Market in Colmar allures visitors with its beautiful, elaborately-decorated sights, a wide variety of activities, and a broad range of gifts on offer.

The historic buildings of the town centre date all the way back to the medieval period. The early-gothic facades are adorned with arched windows and half-timbered gables, which make them the perfect locations for romantic strolls. The fairytale-like setting is bound to win you over immediately – and the folklore-inspired wares, wooden toys, Alsatian sweets and large barrels of mulled wine are bound to enhance the experience further. 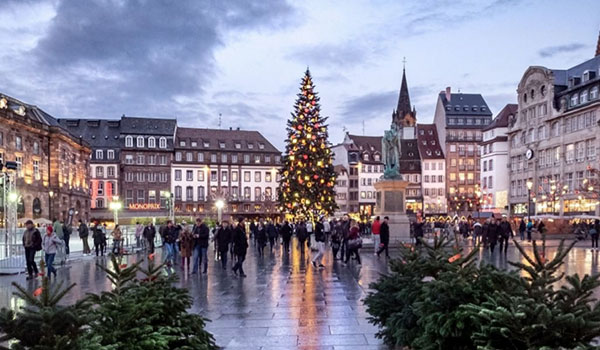 Is the best Christmas market located in Strasbourg or Colmar? – this is the burning question that’s been dividing the residents of the Alsace region since the beginning of times.

While Colmar attracts visitors with its pretty, Game of Thrones-esque sights, grandiose alleyways and beautiful riverbank, Strasbourg offers a similar deal, found at the main square of the city.

The oldest Christmas market in all of Europe, the Christkindelmarik dates back to the 12th century. However, the original market was abolished by Johannes Flinner, a Protestant priest in 1570 – in a bid to erase the last traces of Christian culture.

Originally, the three-day-long event encouraged locals to purchase home-made wares, candles, household goods, smaller gifts, and edibles. The formula remained the same over time, but by the second half of the 20th century, the market was expanded to 36 days. Today, it’s open from November 23 until December 30, with the exception of December 25, the only day it is closed.

Head over here for fantastic views, beautiful gifts and lip-smackingly delicious mulled wine. Which one is the better, Colmar or Strasbourg? You tell us.

For those of you on a budget or have family visiting the Netherlands Hosts a number of awesome Christmas festivities you won’t want to miss. Here are a few: 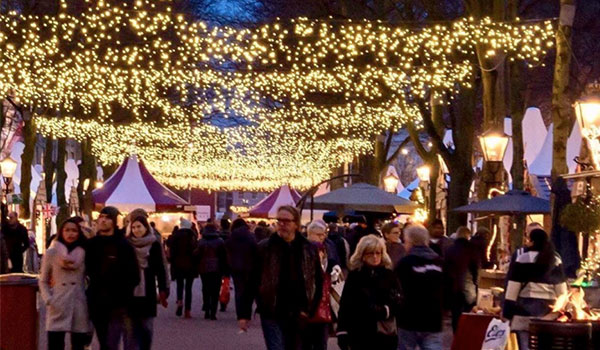 Held between December 12 and 23 each year, the Royal Christmas Fair is one of the oldest event series of its kind across the whole of the Netherlands.

Attended by thousands of visitors each year, this extravaganza is anything but your standard Christmas fair. Some stalls selling homemade jams, candied fruits, marshmallows and rare culinary wonders you’ll reminisce about long after your visit. Others, on the other hand, specialize in gifts, offering nostalgia-inducing games like macau or backgammon, or else, quirky wooden toys, folklore-inspired jewelry and so much more. A word of warning: this is not the place to stroll through quickly. Plan ahead – marveling at the delightful wares will take time. Christmas gift shopping is hardly ever thought of in the same terms with “fun” – except here.

Another thing: you will get hungry. Walking around the labyrinthine structure should be classified as an exercise of its own, one that should be compensated with the right treats. Have you ever tried the miniature pancakes, called poffertjes? The Dutch mean business when it comes to piping hot desserts, and these tiny disks of pure joy will help you fuel through these enervating activities. 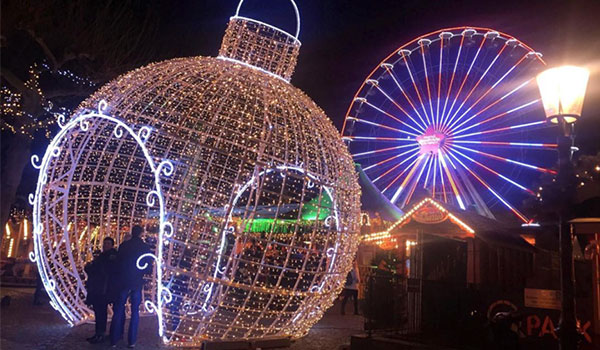 A gigantic bauble made of dainty fairy lights? A ferris wheel with the best views of the whole of the historic city? An ice skating rink that’s bound to keep everybody entertained? The Maastricht Christmas Market provides activities like this and so much more.

Located near the Vrijthof Square – a stone’s throw away from the Meuse river bank – this lively Christmas fair allures visitors with its expertly curated stalls, delicious food options, and a vast array of activities. Our suggestion? Estimate the task lying ahead by taking a ride on the ferris wheel, set time aside for selfies – the decorations here are next level – and make sure to schedule a visit to the Jekerkwartier area. Next? Make a bet on who can try the highest number of different offerings at the MagischMaastricht, a Christmas-y theme park catering for the young and old alike.

As to the culinary scene? Expect an eccentric crossover between Dutch and German cuisine. The best sellers range from bockwurst, gluhwein, and Schrobbelèr, but there’s no shortage of marzipan fruits, lebkuchen, and stollen on sale.

In the mood for something truly special? Don’t forget to pay a visit to the Selexyz Dominicanen, a Gothic church-turned bookstore that welcomes visitors eager to browse from thousands of antique and recently-published titles in a jaw-droppingly beautiful environment. 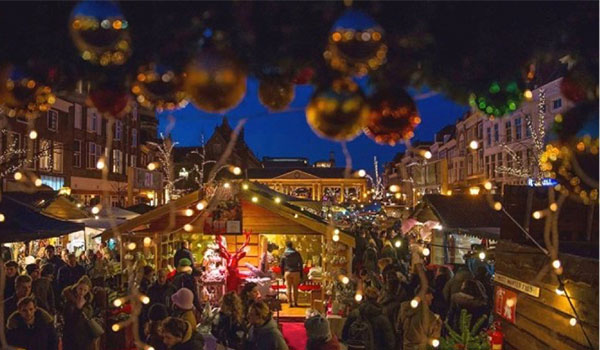 Picture this. During 47 weeks of the year, the embankment of the Nieuwe Rijn river transforms into a lively farmer’s market, with dozens of producers selling their freshly-grown wares, delicious, gnarly fruit and veg, rare delicacies like honey that tastes like a slice of heaven, and large lavender bundles.

As to the other five? The area is home to the most atmospheric Christmas Market conceivable. The scent of vanilla and burnt sugar fills the air, large barrels of piping hot, absolutely delectable gluhwein as far as the eye can see, and food sellers offering some of their concoctions. Here’s what you should do: kick off the party on the ice skating rink or at the local disco blasting delightfully nostalgic pop anthems that make you feel even warmer on the inside. After, you’ll want to head over to the food stands – and try and taste as many of the good stuff as you can. Oh, I almost forgot to mention: the whole market is floating on the river. Sounds picturesque? It’s because it is.