Summer is nearly over, but a fresh heatwave means it’s time for one last trip to the park in the Netherlands

Summer’s nearly over, but there’s still time to grab a beer and a picnic at some of the Netherlands’ best city parks. The Dutch take their parks seriously, and with sun in short supply here, why not follow their lead?

The Netherlands will bask in temperatures of 28 degrees Celsius on Monday and 30 on Tuesday next week, according to the Royal Netherlands Meteorological Institute. This week won’t be bad either, with temperatures in the low to mid twenties expected through the weekend, with little chance of rain.

For anyone dreading the official start of fall in two weeks, the forecast-ed Indian summer will present one last opportunity to relax in the park and soak up some sun, before the temperatures drop and the pub becomes the center of social life again. 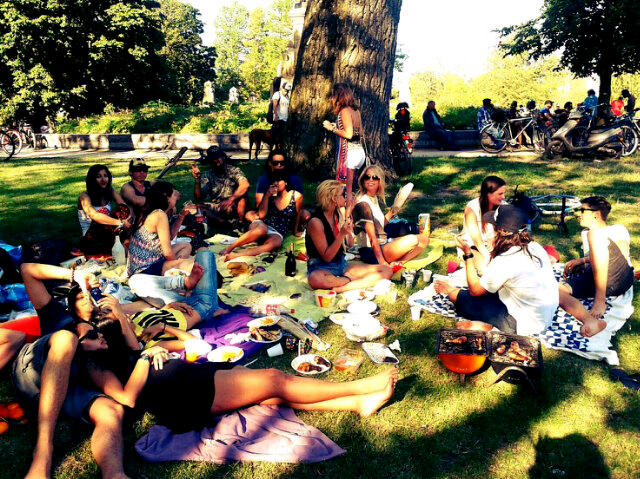 The Dutch love their parks. That much is obvious to anyone who’s spent some time in this wonderful little country. Come summer time, gangs of friends and whole families will cart their fold-out furniture, beer coolers, and barbecues to the nearest park and set up there for the day.

They have every reason to. For one thing, they don’t often get the chance. The Dutch winter is long and wet, with only around 1,600 hours of sunshine per year. To put that in perspective, even Stockholm, Kiev and Moscow get more sun each year than any Dutch city. In fact, Amsterdam ranks only two places above perpetually-dreary London in the sunlight league tables.

Added to that, most city-dwelling Dutchies don’t have the luxury of a garden. The Netherlands is the most densely populated country in mainland Europe, with nearly 18 million people crammed between its dykes and into its cities. Within these cities, apartments are the default residence, with a balcony often the only access to the outdoors.

Within these cities, however, they’re spoiled for choice. Amsterdam offers a wealth of green space, from the eternally popular Vondelpark, to the busy Oosterpark and Sarphatipark, as well as the sprawling Noorderpark across the river to the north. Rotterdammers can chill in the simply-named Het Park, residents of Den Haag can relax in Park Sorghvliet or the Haagse Bos, while Eindhovenaars can stroll through the gorgeous Stadswandelpark.

Every one of these parks regularly host events and concerts in the summer months (ehum, non-corona years). Some are home to multiple pubs and restaurants, many have their own populations of rare birds and wildlife, and others provide a wealth of activities, from museums to mini-golf. This weekend alone, the Vondelpark is hosting classical music and comedy performances, the most opinionated members of the public will speak their minds on Sunday at the Oosterpark’s ‘speaker’s stone,’ and nearly every park in Rotterdam has something on.

As for how to plan your visit, that’s up to you. Do you rock up with a bag of beer or transport the entire contents of your house? What are your must-haves for a day in the park? Let us know on social media, and tell us your favorite Dutch city park in the comments.