Squatting In Amsterdam: The Comeback Of An Old Tradition

It is a location that every Amsterdamer has secretly dreamed about. An old house at the Keizersgracht, right at the bridge, with a stunning view over the water. For most of us, this will probably stay a dream as the rents in the historical canal zone in Amsterdam are ridiculously high. Unless you don’t pay rent. And that is exactly what the squatters do that have been living at Keizersgracht 318 since July 2020. 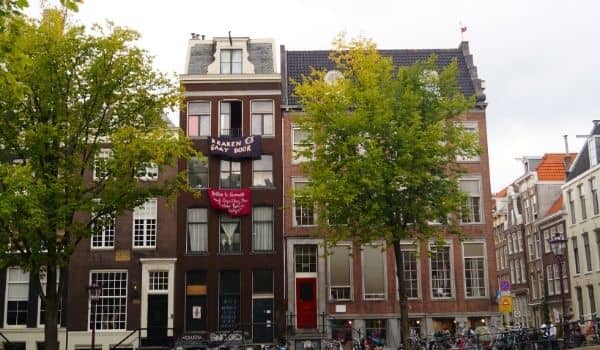 A Tradition Since The Sixties

The squatting movement (dutch: kraken) started in the 1960s when the Netherlands faced a shortage of housing. While at the same time a lot of buildings remained empty whose owners intended to drive up the market prices. A decision of the Supreme Court in 1971 cleared the way for squatters as it said that from now on the concept of domestic peace (dutch: huisvrede) also includes squatters. This meant that access to the building required permission from the current occupant. Or with other words: Once they were inside the building no police or authorities were to disturb their huisvrede.

A possibility, gratefully used by many squatters in Amsterdam, who occupied multiple buildings all over the city and country. Sometimes they even squatted entire areas, such as the neighborhood around Nieuwmarkt in the city center of Amsterdam. The squatters around Nieuwmarkt successfully avoided the demolition of several buildings in 1975 as the city planned to build a new metro tunnel. The confrontations included over a hundred municipal police supported by 500 military police. The Nieuwmarkt metro station still shows artwork commemorating these days of resistance.

Clashes Of Squatters and Police

The squatter’s movement had its peak in the 1980s when in Amsterdam Krakers had declared Vondelstraat as their territory. In February 1980 the state evicted a building on Vondelstraat which led to protests of hundreds of squatters who re-squatted the building and built barricades. In the violent clashes squatters threw objects and petrol bombs, the police responded with tear gas. Later on the same day, a tank was brought into the street to break through the barricades. This was the first time since World War II that a tank has been used in the streets of Amsterdam.

Later in 1980, there were more clashes between the squatters and the police. Earlier in 1980 Queen Juliana had announced to abdicate in favor of her eldest daughter Princess Beatrix. But in April, during the time of the coronation, the situation escalated. Protesters, using the slogan “No housing, no coronation” (dutch: geen woning, geen kroning) faced 10,000 police officers and some military officers at Dam Square, Rokin, and Vondelstraat.

After the clashes, in the later 1980s and 1990, things seemed to calm down and squatted buildings went through a process of legalization as the inhabitants started to pay rent and later bought the buildings. Examples in Amsterdam are OT301 and Vrankrijk or Paradiso and Melkweg which developed into important cultural centers. Same as the squatter’s village ADM in the harbor of Amsterdam. Still, in 2010 squatting became illegal, punishable with a maximum of one year in jail. In the case of violence, the punishment could be up to 2 years and 8 months in jail. Over the following two years in Amsterdam, around 330 squats were evicted. In 2019 ADM followed, after 21 years of being squatted.

Even though it seems like the squatting movement was facing its end, between 2012 and 2015 a new group formed, named We are here, based on 200 migrants from about 15 different countries. However, it is split into different subgroups, such as a women-only group or a Swahili language group. The last one first squatted a building on Amstelstraat at the end of 2016, followed by a disused kindergarten in Zuidoost and a building on Sarphatistraat in 2017. In May 2018, they were occupying a former club in Noord. By the end of 2017 the We Are Here collective has occupied more than 30 parks and buildings. Many of the group members had their asylum status in the Netherlands denied but cannot return to their home countries for various reasons. Even revealing the people’s identity can be dangerous which is why the cooperation with media is scarce, especially with camera teams from Dutch TV-channels. 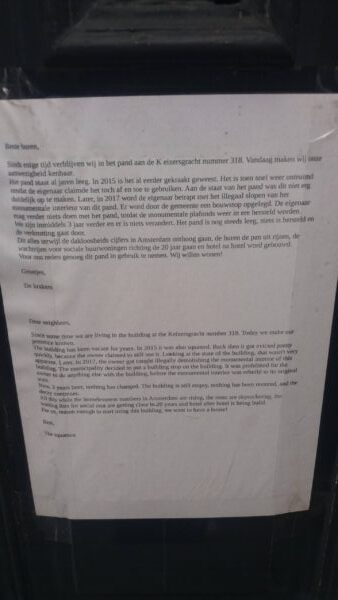 Also at Keizersgracht, the squatters prefer to not talk to the media, instead, their printed statement is pinned to the front door. “The building has been vacant for years. In 2015 it was also squatted. Back then it got evicted pretty quickly because the owner claimed to still use it. Looking at the state of the building, that was not very apparent. […] Now three years later, nothing has changed. The building is still empty, nothing has been restored and the decay continues. All this while the homelessness numbers in Amsterdam are rising, the rents are skyrocketing, the waiting lists for social rent are getting close to 20 years, and hotel after hotel is being built. For us, reason enough to start using this building, we want to have a home.”

It is indeed a fact that Amsterdam is still facing a housing crisis and very often young families for example are forced to move into the suburbs as they are unable to effort the high rents in the city center. And for the squatters, it is their way of making their anger about this injustice heard.