Rotterdam Architecture: 6 of the Most Unique Buildings in Holland

If you visited Rotterdam over 10 years ago, you probably got out of Centraal Station and felt like you were looking at a concrete wall. But over the past decade, Rotterdam architecture projects have transformed the cityscape.

Unlike cities such as Utrecht or Amsterdam, Rotterdam doesn’t have much old, historical architecture. During World War II, the Germans bombed the port city, leading to fires that caused widespread destruction.

Rotterdam had to rebuild, but after the war, the city never really decided what their skyline would look like. And so today, you’ll find a mish-mash of building styles throughout the city! As architect Reinier de Graaf puts it, “This is the mess that is Rotterdam, and Rotterdammers are proud of it.” 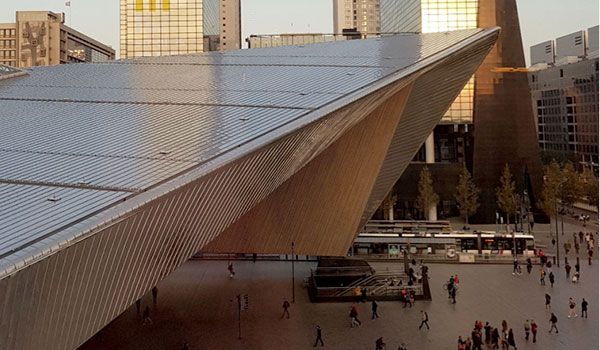 If you take the train into Rotterdam, your first architectural experience will be the train station: Rotterdam Centraal.

It was built between 2008 and 2014, and the temporary Centraal Station was built facing the Groothandelsgebouw (more on that building in a bit).

So if you visited Rotterdam during that time, then there’s a very good chance you were, in fact, looking at a concrete wall when you exited the station.

But now Rotterdam Centraal Station is an architectural attraction of its own. The stainless steel roof of the south entrance points towards the city center, though its north entrance has a much more modest, rectangular façade. 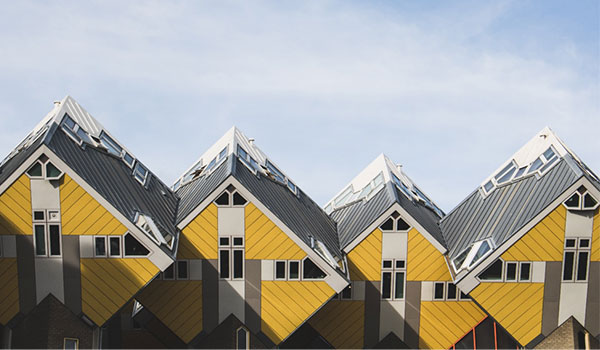 You will know the Cube Houses when you see them!

Architect Piet Blom designed the bright yellow Cube Houses between 1982 and 1984. If you’re interested in learning more about the architect, there is a museum in Hengelo.

The Cube Houses have 38 residences, each designed with three floors. The first floor is the living space with a kitchen and living room; the second has the bedroom and bathroom, and the third can be considered a private living or relaxation space. 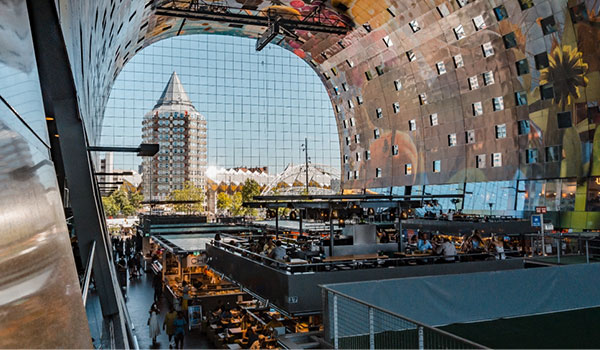 Some have described it as an arch, while others have called it a horseshoe. However you see it, the Markthal is another impressive feat of Rotterdam architecture at Blaak.

While the public space is full of food stalls, shops, and people, the building itself houses 2,800 apartments.

With life bustling in the main hall and homes within its walls, the Markthal’s combination of housing and public space is a modern take on city living. 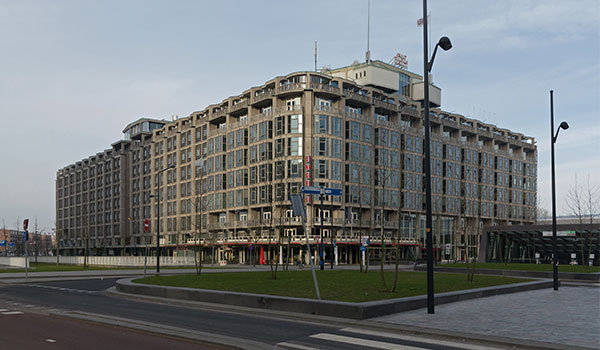 Completed in 1953, the Groot Handelsgebouw was one of the first construction projects after the World War II destruction. At the time, it was a unique concept to construct a building intended to house multiple companies.

Entrepreneur Frits Pot wanted to help emerging businesses by creating a shared office space. And so he teamed up with architect Huig Maaskant to design a building fit for offices, warehouse space, and show rooms.

Today, the Groot Handelsgebouw houses over 400 companies, as well as restaurants and shops. It was renovated in 2005, and in 2016, the Cambridge Innovation Center (CIC) opened its first European location within the building. 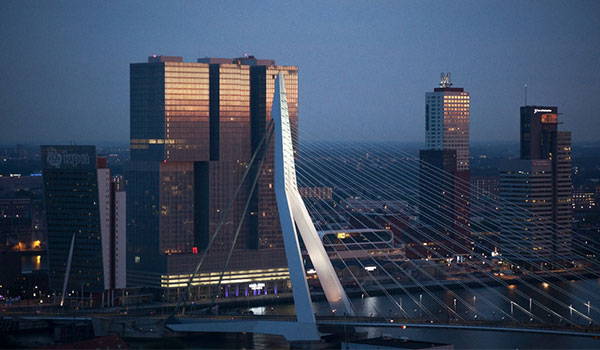 Technically, it’s not a building, but Erasmusbrug is still an impressive architectural structure! Also known as The Swan, it connects the northern and southern halves of Rotterdam. The 802-meter-long bridge was designed by Ben van Berkel and completed in 1996.

The bridge is named after Desiderius Erasmus, a prominent philosopher and humanist during the northern Renaissance. He was supposedly born in Rotterdam, and his name can be found on buildings, streets, and, of course, the bridge.

Erasmusbrug was featured in the 1998 Jackie Chan film Who Am I?, and also played a part in the Tour de France in 2010 and 2015. But for any expat new to Rotterdam, it can be an intimidating bridge to bike across! 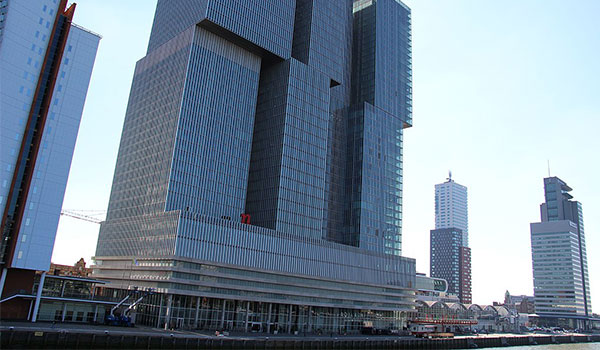 Designed by Rem Koolhaas and his architecture firm OMA, De Rotterdam was completed in 2013. At a height of nearly 150 meters, the stacked rectangles look different depending on the angle.

And, similar to other buildings on this list, De Rotterdam houses apartments, offices, restaurants, and even a hotel. OMA wanted De Rotterdam to be like a vertical city – a building that could satisfy every daily need while encouraging connection between citizens.

You can’t miss the Rotterdam architecture when you visit! Whether you take a tour or explore on your own, the buildings throughout the city will stand out.

Is there a Rotterdam architecture tour you recommend? Did we miss your favorite building? Let us know in the comments!