Is it Holland, the Netherlands, or the Dutch?

If you’re wondering what exactly the differences are between “Holland”, “The Netherlands”, and “Dutch” then you’ve come to the right place. A common misconception is that Holland is another name for the entire Netherlands, however, it is actually just a part of the entire country. To be fair, it can get a bit confusing and we’ll explain why.

There are 12 provinces of the Netherlands in total (each with their own Governor and assemblies), but when a native Dutch person says Holland, they actually mean the combined areas of two specific provinces: North and South Holland.

Fortunately, if you’re visiting or new to the country, the Dutch in the Kingdom of the Netherlands are willing to forgive your error – but perhaps not before letting you know of it! Notoriously “direct”, the Dutch people are known for telling you how it is, especially when it comes to the country they’re proud of (of course for good reason).

But that’s exactly why you’re reading this, isn’t it? To learn? So here we go… 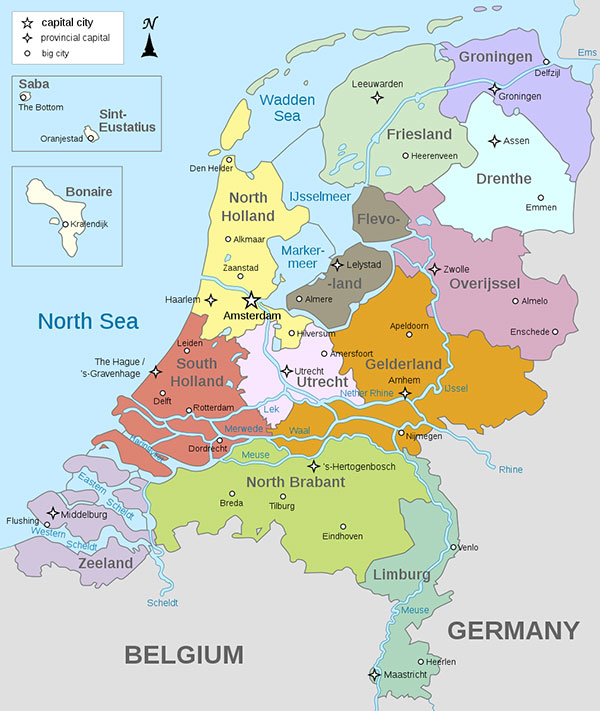 Kingdom of the Netherlands

Officially, the country and its territories are called “The Kingdom of the Netherlands” because it also includes 3 additional countries as part of its controlled territory. You may have even been to one of them to visit due to their popularity as tourist destinations: Aruba, Curaçao, and St Maarten. 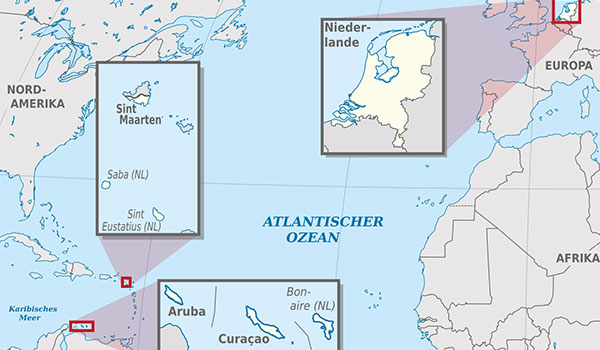 Interestingly, they also have multiple currencies depending upon the territories or municipalities. The euro is the official currency in the European part of the Kingdom. The US dollar is used on Bonaire, St Eustatius, and Saba. Curaçao and St Maarten have a joint central bank and a common currency, the Netherlands Antillean guilder (the currency the Netherlands had prior to the Euro being standardized). However, it is also possible to use the US dollar on St Maarten. Finally, Aruba’s currency is the Aruban florin.

Differences Between Holland and the Netherlands

Besides the regions themselves being different, the history, language, and people are also quite different. Remarkable in our opinion for such a relatively small country, but each has unique differences.

One of the main differences is the fact that Frisian is spoken in three small areas of Northern Netherlands in the Friesland Province. Even more interesting? There are three dialects within them: West, East, and North Frisian!

Meanwhile, on the other side of the country in the North Brabant province, you’ll find that the people, as well as activities like restaurants and museums, have a mix of Dutch (also a different dialect than Holland’s called Brabantian), English, French, and German. You’ll also find this mix in the Limburg province next door, but they also have their own dialect of Limburgish!

Nickname Holland for the Win

Have you ever had a nickname stick that you maybe didn’t like? That’s kind of what happened with the Netherlands. Netherlands Tourism even points out: “you will probably often get corrected by one of the local inhabitants… despite the fact that we will cheer ‘Holland’ during sports events :). So basically it’s ok for us to call it Holland… but you should call it the Netherlands.”

The two regions that make up what is called “Holland” are actually called Noord Holland and Zuid Holland (or North and South Holland). These two regions combined actually makeup nearly 40% of the country’s population. Perhaps it’s no wonder more people have heard of Holland outside of the Netherlands – there are just more of them.

It’s grown so popular in fact, that tourism companies like Holland.com have adopted it as the all-encompassing name for the Netherlands on their website. Many restaurants and other tours have adopted the name, at least partially, because it’s recognizable. There’s even a dairy company that bears an undeniable similarity.

Part of its popularity came from a logo that was created (seen on previously mentioned Holland.com) with a tulip and “Holland” shown. In order to help clear things up, the government has announced they are changing this logo and presented this new one in replacement:

To put it simply, the difference is the region you’re talking about. Internationally, though, “Holland” is more widely used – likely because it’s shorter!

Dutch – The People or the Language?

The simple answer is both! The language spoken is Dutch, and the people are the Dutch. Not to be confused with going Dutch on a date, both the language and the people are truly unique. For example, there are multiple variations of the language such as Afrikaans (spoken in South Africa and Namibia) and Frisian – spoken by some 350,000 people in the province of Fryslân which will be covered a bit more below.

With all of these variations, there was even a Dutch Language Union developed in order to standardize it across the various countries as well as have a base for the European Union. It was established to also help keep the language alive and well by keeping it up to date so they’re in charge of it being studied globally.

This is a contributor to the fact that they have established courses in universities in 40+ countries globally to teach Dutch. But while the Dutch speak Dutch natively, the Netherlands as a country has (one of) the highest percentages in English proficiency for non-native speakers in the world!

In Old English, ‘dutch’ simply meant “people or nation.” (This also explains why Germany is called Deutschland in German.) Over time, English-speaking people used the word Dutch to describe people from both the Netherlands and Germany so it became normalized globally to use it not only for the language but also for the people.

So whether you’re visiting or living in this wonderful country, you’ll be able to decipher when a Dutch person tells you they’re from Holland in the Netherlands and love to speak Dutch.

Ultimately, you’ll more than likely be forgiven should you refer to the whole of the Netherlands – or a region that isn’t North or South Holland – as ‘Holland,’ but if you want to make sure not to offend anyone, as well as to be correct, be sure to say ‘the Netherlands’. Especially when speaking to the Dutch!