Croquettes, Frikandel, Cheeseburger. Golden brown color, crispy crust, a quick bite to eat. No one has to wait, because the unhealthy snacks are always ready and waiting for the customer. There’s no need to order either, just grab it. Insert a coin, press a button and the tray snaps open to reveal the fast food. The concept of the FEBO snack bar chain has cult status in the Netherlands. 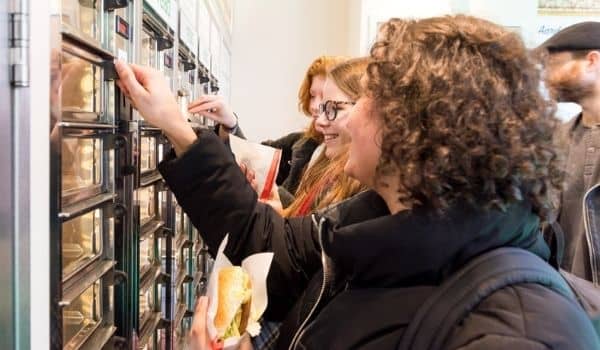 A Place For Tourists And Locals

Tourists usually come to FEBO to have a look and to have a bite. They nudge each other, point into the compartments, and bend over as if looking into terrariums. Somewhat perplexed, they stand around with their bills. The change machine on the other side of the room is usually overlooked. New customers are too distracted by the display of fried goods. But nothing works here without coins, because the products are cheap. A croquette costs 1.60 euros, 100 grams of fries are available for 1.70 euros, and a burger costs just 2.50 euros. And then please use the right coins, because the vending machines don’t change.

Those who are completely lost simply order at the counter, where each product can also be prepared individually in the kitchen behind the vending machines. Costumers have to get fries here anyway. You can’t get them from the glass shelf. Drinks and ice cream either. Since the beginning of 2018, FEBO has also been offering vegetarian options, such as the vegetarian grill burger or the Vitaaltje, the meatless version of the croquette.

Quick And Practical Since 1941

The concept that foreigners find so amusing is already old hat in the Netherlands, albeit a popular one. After all, Johan de Borst was probably aware that his countrymen like things fast, practical, and uncomplicated as early as 1941, when he opened a bakery on Amsterdam’s Ferdinand Bol Street, hence the name FEBO. In addition to bread and rolls, the shop also served homemade croquettes. The snack quickly became so popular that in 1960 the store ceased bakery operations and went completely fast food, with vending machines for croquettes. It has since grown to the point where there are now nearly 70 stores throughout the Netherlands. More than 25 in the capital Amsterdam alone. The locations are run individually by franchise partners, similar to the Subway concept.

To make things even faster, the first FEBO branches have also opened in May 2019, where customers can make contactless payments directly at the wall with a bank card. Those who want it even more convenient (and with less movement) can drive to the FEBO drive-thru’s in Oostzaan, Wormerveer, Zwolle, Alkmaar, or Nijmegen.

Even if FEBO snacks may feel like the best food in the world after a night of partying, overconsumption of the products quickly makes itself felt on the scale. That’s because the calorie count is hefty. A 100-gram croquette has more than 200 calories, while the cheese soufflé weighs just 65 grams but packs a hefty 300 calories. That’s why Anouk Snelders came up with the idea of adopting FEBOs quick-and-easy concept but with a healthy twist. The Amsterdam entrepreneur wanted to prove that healthy food can be just as quickly accessible as high-calorie FEBO snacks. In 2018, she founded Health Food Wall, which is based on the same vending machine principle as FEBO. However, instead of burgers and croquettes, there are healthy, natural products. 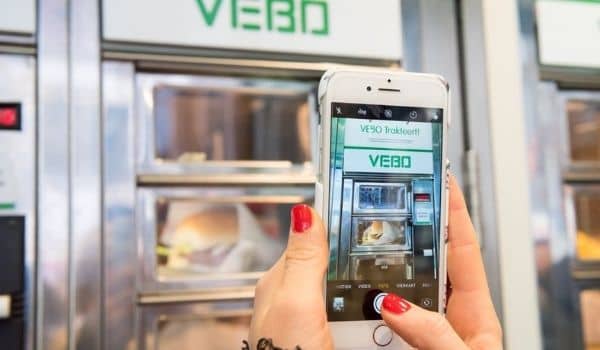 However, Anouk Snelders’ idea shows that such a difference can sometimes be made very quickly. The Amsterdam entrepreneur wanted to prove that healthy food can be just as quickly accessible as high-calorie FEBO snacks. So in 2018, she founded Health Food Wall, which is based on the same vending machine principle as FEBO. However, instead of burgers and croquettes, there are healthy, natural products.

“We started with meal salads for lunch or dinner. We’ve since added wraps, juices, and ginger shots,” Snelders says. A 400-gram salad with falafel and edamame beans, for example, is available for 6.95 euros. The vending machines, which are now located at Schiphol Airport as well as at exhibition centers and hospitals, cool the meal boxes down to four degrees, keeping them fresh for up to five days. Unlike FEBO, however, the glass compartments do not have to be touched but open automatically. The plastic trays in which the meals are served are completely recyclable, as is the cutlery.

And similar to FEBO, the concept is finding favor with both local and international customers. “At Schiphol Airport in particular, however, it is evident how much Dutch people have already assimilated the vending concept. International customers tend not to. Many are then quite enthusiastic about our vending machine and write to us saying how innovative they think the idea is,” says Snelders. There is now also a vending machine in Belgium, as Health Food Wall has the necessary licenses to deliver food abroad. Cooperation partners and customers are currently being sought on the German market. But anyone who wants to taste the real FEBO calorie bombs will still have to travel to the Netherlands. 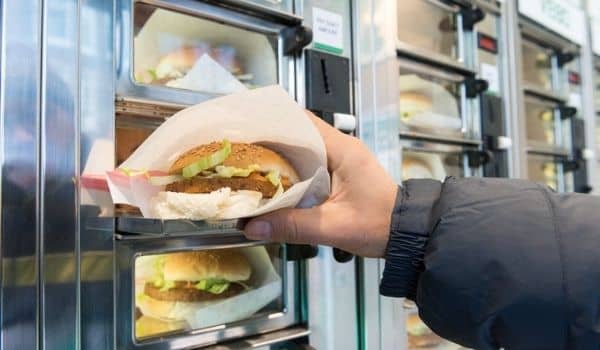 However, there is one thing that Snelders did not take over from FEBO – and that is the production of its fanwear, i.e. a fashion line with the color concept in red and white and the logo of the snack bar. The FEBO fashion is available as slippers, with fur or without, as a bath towel, pajamas, dress, underwear, winter hat, or cycling shorts. But this is probably really only something for real fans. For most, eating the deep-fried calories is enough. But if you want that, you have to go to the Netherlands, because there are no plans for the company to expand abroad. The vending machines are to stay where they belong.