You may not know it, but there’s a growing kickboxing scene on the streets of Amsterdam, outside the reach of the law. Would you dare step into the ring with the Netherlands’ fiercest fighters?

Modern kickboxing was arguably invented in the Netherlands, when Dutch fighters traveled to Japan in the 1970s and brought back the techniques of the Japanese, who blended Kyokushin karate and Muay Thai. Combining these techniques with western boxing, they created a style of fighting that’s recognizable to anyone who’s watched Amsterdam-based Alastair Overeem fight in the UFC: devastating low kicks, heavy punch combos, and constant forward-moving aggression.

Amsterdam’s kickboxing clubs are legendary, with Mejiro Gym, Mike’s Gym, and Vos Gym among the best of the best. In fact, Mejiro Gym’s founder, Jan Plas, was among the three fighters who brought Japanese kickboxing back to the Netherlands in the 1970s. 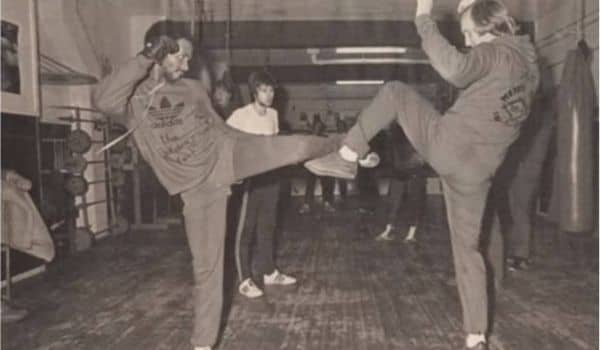 But there’s a growing movement of fighters challenging each other on the streets. Earlier this week, Vice profiled underground fight promoter ‘Migi,’ who runs the ‘Hoodfights Amsterdam’ Instagram account. Nearly 45,000 followers tune in to watch fights live-streamed from empty parking lots and empty plots of land outside the city, and crucially, out of the sight of the police.

Fighting on the street is illegal in the Netherlands, but that doesn’t mean Migi’s fights are lawless brawls. Two fighters compete over three rounds, a referee ensures nobody lands illegal blows, and the crowd is strictly forbidden from jumping in. Additionally, Migi told Vice that fighters aren’t allowed to use the bouts to settle personal scores or vendettas.

“All of our fights are friendly,” he explained, “but the battle is real.”

When Vice’s reporter visited one of Migi’s fights, two rappers from the same Amsterdam-based group were squaring up to each other. Both unloaded the trademark sweeping low kicks and hard jabs of the Dutch style at each other, with the fight spanning all three rounds. Despite his broken nose, an experienced brawler and alleged criminal named ‘Choppa’ was declared the winner at the end.

Not that his opponent, ‘VK’, minded. The pair embraced afterward, with Migi declaring “nothing but love, boys!”

Can anyone join in? Vice didn’t explain how the fighters get in touch with each other, but anyone dedicated enough could surely get in touch with Migi and try their luck. But street fighters are likely cautious of new arrivals, given that their pastime is frowned upon by the police and the law-abiding residents of Amsterdam. That’s why the fights take place in empty lots, with Migi explaining that he tries to “stay away from busy neighborhoods as not to disturb the peace.”

Anyone looking to try martial arts in a more conventional setting is spoiled for choice in Amsterdam though. The gyms mentioned above have world-class reputations and have trained winners in the UFC, Glory Kickboxing, K1, and Pride championships. Moreover, these members can learn techniques, spar with each other, and work on their strength and conditioning at these facilities, all with a roof over their heads, unlike in the car parks frequented by ‘Choppa’ and ‘VK.’

Let us know where you train, and tell us your experience with martial arts or kickboxing in Amsterdam on social media. Already an expert? Then tell us if you think you could hold your own against Amsterdam’s fiercest street fighters.