5 Castles You Must Visit in the Netherlands

Once the bustling centre of social life, castles have since transformed from the most-coveted places to get into to the refurbished backdrops of film shoots. On a visit, you might catch sight of busy film crews, partake in highly-informative exhibitions, or explore vast pieces of land devoted to preserving centuries-old horticultural practices.

Whether you’re looking for a quaint location to escape big city life, a staggeringly beautiful place for a quick romantic getaway or a trusty, reliable spot where exhibitions will keep kids and adults equally entertained, this list will provide the best recommendations. 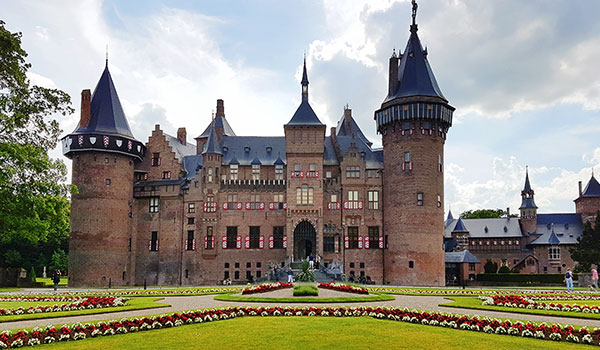 Owned by the Van Zuylen van Nijevelt family–whose ancestry can be traced back to the 13th century–this castle is anything but your average museum-cum-heritage sight.

Designed by world-famous architect Pierre Cuypers–the maven responsible for the Amsterdam Centraal station, the Broerkerk and the Rijksmuseum–the Gothic building is adorned with an array of grandiose features.

The insides are no different: the spacious, lofty hall was decorated with some of the finest, most-dazzling artworks known to mankind, including richly-detailed, jaw-droppingly-exact Flemish tapestries capturing pastoral scenes and a vast collection of the most-elaborate blue porcelain sets from China and Japan. The bedrooms are just as opulent: furnished with exquisitely-designed Baroque furniture, slim, eloquent sofas, and adorable pouffes, they attest to the easeful, luxurious mentality of a by-gone era. The sizeous gardens could be studied for days: expansive green spaces, fruit orchards, and tastefully-built, perfectly-kempt flower arrangements, a soothing, crystal-clear lake are just some of the sights to expect.

De Haar Castle invites visitors to plunge themselves into an unfathomably glamourous way of life. Unlike an art institution, the sight provides a rare glimpse into the goings about of the Van Zuylen family, offering a one-time opportunity to study the buoyant, extravagant ethos with which they arranged the space. This is a modern-day fairy tale in every sense of the word: the castle is packed with the most-magnificent, grandiose objects, accessories, and ornaments you can imagine. Unlike with your average museum, the facilities are still in use by the members of the family.

The Van Zuylensnreturn to the sight every September to throw a wealth of private events and parties catering to the most sophisticated tastes. A much-coveted attraction among celebrities, media figures and high-profile financiers and politicians, previous guests include Coco Chanel, Roger Moore, Maria Callas, Gregory Peck, Yves Saint Laurent, Joan Collins, and Brigitte Bardot.

To catch a glimpse of the everyday life of one of the most affluent families in Europe–and find answers to burning questions like where exactly should the dessert fork be located on the table in accord with the rules of etiquette–head over to the De Haar. 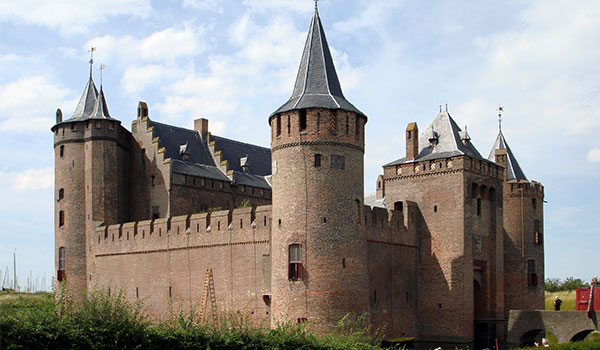 If you ever watched the cult television series De Club Van Sinterklaas, this castle needs no introduction. A popular shooting location for documentaries, films and serials revolving around a bygone era, the Muiderslot has everything one would expect from a castle with a rich, varied history.

With conspiracies, murders, and other conflicts taking place within its walls, it’s safe to say that this is one of the most interesting locations on this list.

Built in 1280 by Count Floris V, the original castle was demolished after just one century. A cause of heated conflict for merchants and the members of the Dutch royalty – the Muiderslot was first erected as a place to collect tax levies from the tradesmen travelling towards Utrecht – the owner of the building was ruthlessly murdered as part of an international conspiracy, while the castle was demolished to the ground in a bid to ease financial regulations affecting the rapacious sellers.

As the makeup of the Amsterdam-based elite changed, so have the opinions about the castle. Re-constructed in the 14th century as part of the Dutch Water Line, the building acquired a crucial role in Dutch military defense. By the 16th century, the Muiderslot transformed once again: this time, the castle blossomed into a vibrant, colourful, intellectual hub attracting some of the most successful painters, artists, and academics from across the country and beyond.

The castle currently hosts an exceptionally-curated, thoroughly-detailed permanent exhibition detailing each of these historic periods. Owned by the Rijksmuseum, the Muiderslot welcomes kids, families, and people from just about any age gap with interactive displays, a plentiful of games and entertaining programmes and miscellaneous events, such as falconry workshops. 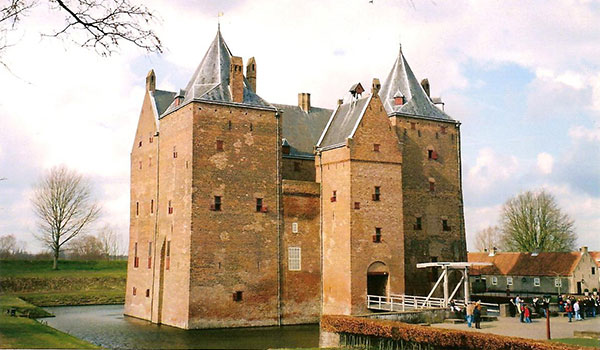 For an authentic experience with tour guides dressed in medieval-era fashions–including servant-aprons, colorfully-styled, strikingly stylish fools and a dashing knights–head over to the Loevestein Castle.

Home to vast historical resources and exceptional educational programmes, this castle has taken on the task to teach young kids and beyond about the everyday customs and traditions popular during the ruling of William of Orange, the Dutch Republic, World War I., alongside a number of others. A popular spot among school teachers and kids alike, the Loevestein allures with unparalleled facilities, fun games and charming guides ready to disperse some otherwise hard-to-attain knowledge about lesser-known historical facts.

Alongside its unmatched learning initiatives, the Loevenstein Castle also hosts business meetings, private parties, special events, weddings and the like. Some of its rooms were transformed into a hotel, with an interior design that faithfully adheres to the overarching historical focus. Named Officers’ Quarters, Commanders’ Quarters and Custom Officers’ Quarters, these spacious, beautifully-furbished environments invite guests to experience first-hand the jaw-droppingly complex history of their surrounds. Those with a penchant for romantic gestures are strongly encouraged to go punting on the nearby moat or try the wide array of water-side restaurants nearby.

Built between 1357 and 1397, the Loevestein Castle was originally intended to function as a military basis. By the 16th century, it was turned into a state prison, and later, into a crucial location for the Dutch Water Line. The displays on show capture the most-titillating, vibrant aspects of each period, shedding light on historical customs and rituals everyone should know about. 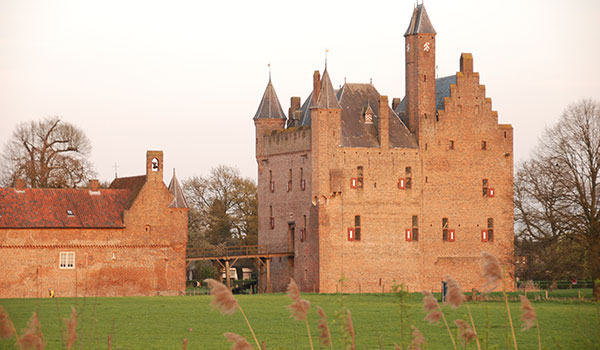 The location of Paul Verhoeven’s much-popular, cult-classic television series, the 1969 Floris, the Doornenburg Castle needs no introduction for film buffs and movie fiends. If the work of the Hollywood legend isn’t your cup of tea, worry not: the Doornenburg Castle has a lot to offer for those not as versed in film trivia as well.

One of the oldest castles still standing in the Netherlands, the Doornenburg was originally built in the 9th century. As its purpose changed over the course of history, so has the architecture. Intriguingly enough, the building was expanded on dozens of occasions, with a chapel, sleeping quarters, and farmland added later on. Visitors are encouraged to trace the origin of the additions, with the so-called front castle and the main castle serving as easy starting points for the investigation into the ever-changing architectural styles of the past thousand years. Unlike any other castle in the Netherlands, the Doornenburg Castle also comprises a walled bailey, a unique and highly-unusual feature.

Located just off the German border, this the town of the same name allures visitors with dazzling natural resources, including the Fort Pannerden, Pannerdens Kanaal and the Millingerwaard. 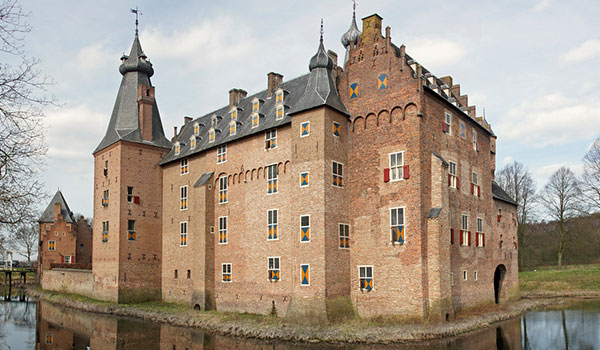 Not for the faint-hearted:, this castle is a well-known sight for supernatural activity and a popular spot to catch ghosts. In 2004, the building played host to a television show, Most Haunted, which investigated if spectres live in the surrounds. While no traces were found, every visitor is encouraged to enter the building with an open mind, ready to be visited by the soul of a centuries-old, long-deceased young girl, an kind, soft-spoken elderly man, or an ageless demon.

While the gatehouse has been transformed into a hotel–with rooms decorated with the most-elaborate tastes and a breakfast menu guests can’t stop raving about–the rest of the building hosts three different museums. The Huntingmuseum (Jachtmuseum) explores the complicated, though the nonetheless exciting history of agricultural developments starting from the early medieval period, alongside displays about punishment methods dating from the same era, and a mini-exhibition exploring the evolution of hunting strategies. The Museum Veluwezoom showcases the best artworks depicting the castle, while the Pharmacy Museum Kisters offers a rare glimpse into the development of the pharmaceutical industry from the 1780s until today.